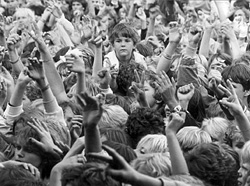 Nuoperi maps out, collects and preserves material connected to Finnish youth work. In addition to collecting and preserving material, Nuoperi also focuses on using the preserved material. Nuoperi operates in cooperation with teaching and research connected to the matter. Collecting retrospective knowledge by conducting interviews and questionnaires, receiving donations and archiving, digitizing material, publishing research, instruction and information providing and following the youth work field and taking part in the events of the field are all a part of Nuoperi's everyday life.


The national project, funded by the Ministry of Education and Culture, began in 2002. In 2010 the same Ministry chose Nuoperi to be a National Service and Development Centre in the field of youthwork. In 2017 these centres were closed down by the Ministry.

There is always at least one special project, connected to some area in youth work, going on at Nuoperi. The projects have resulted in, e.g., a touring exhibition on the decades of youth work and several publications. In English you can read "Swings, films, clubs and tattoos - an ethnologic approach to youth culture" or get to know more about Finnish Youth Centers, which we have ten, from the CD-ROM that was made in 2008.

Since 2007 the Nuoperi project has operated at the School of History, Culture and Arts Studies at the University of Turku in the subject of Ethnology.